I have been waiting all summer to see Wadjda. Ever since seeing the trailer, I was immediately drawn to this story of a headstrong, rebellious young girl defying tradition in a conservative society. It might sound like a familiar theme but in this case, we’re talking about Saudi Arabia, one of the most restrictive countries in the world, in regards to women’s rights. Considering that women are not allowed to vote nor drive and any woman can be arrested for being in public with a man not related to her, the movie breaks a lot of barriers and is a rare glimpse into a very closed society.

It’s the first feature-length movie filmed entirely in Saudi Arabia (where cinemas are outlawed!) and it’s the first film by a Saudi Arabian woman, the talented Haifaa Al Mansour making her directorial debut (she often had to direct from inside a van to avoid being arrested by the religious police if seen with her male film crew). The young heroine of the movie, Wadjda, played by 12 year old Waad Mohammed, will steal your heart. Equally precocious and rebellious, Wadjda listens to banned Western music at home, uses her entrepreneurial spirit and guile to make money off her classmates, and becomes obsessed with wanting to buy an expensive bicycle.

In a neighborhood where only the boys ride bicycles and no “proper” girl would even be allowed near one, Wadjda doesn’t care — she wants to show Abdullah, her friendly male rival, that she can beat him if only given the chance and the bicycle is symbolic of both the parity and equality she seeks as well as freedom to live her life as she wishes.

While her mother struggles with the uncertainty of her marriage with Wadjda’s father, which is an illumination on a woman’s lowly place in Saudi society, Wadjda’s irrepressible charm and tenacious determination to do whatever it takes, even joining a religious club which she loathes, will move you and fill you with both hope and heartbreak: Heartbreak that there are intelligent, talented, forward-thinking girls suffocating in repressive patriarchal societies all over the world, but also hopeful, that no matter how much a society tries to control one gender and deny them their rights, girls like Wadjda will continue to find ways to challenge the status quo and defiantly express themselves. 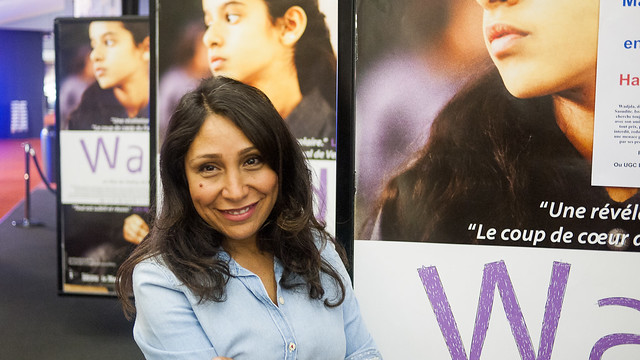 In a Euronews interview, Al Mansour says, “The situation for women in Saudi Arabia is very difficult and the country is very conservative and denies women a lot of things… To me, making a film is not like saying ‘ah, it’s really dark, it’s really difficult’. I wanted to make a film to say ‘yeah, it’s difficult and everything, but we need to fight’. That’s it.” It’s a timely message and a timely film given the precariousness of women’s rights in the Muslim and Arab world even after the Arab Spring revolutions. The film opens on Friday, September 13, in the US in Los Angeles at the Laemmle Royal and New York with more cities soon (list of cities and dates). It is a must-see film, easily the most heart-warming, inspiring film I’ve seen all year!

One Reply to “Wadjda: Irrepressible Girl Power from Saudi Arabia”