Don’t worry if you missed out–I asked about their new single for you.

(LOS ANGELES) — It’s August 18th, a bright Tuesday on the Westside. For SoCal band Chicano Batman, the year has had in store for them the spoils of Coachella and opening for Jack White. Next up is a grand homecoming on August 28th as headliners at the El Rey. Though they’ve just wrapped up their tour with Alabama Shakes, Chicano Batman celebrates by throwing a humble kickback with pizza for their loyal Angeleno fans.

END_OF_DOCUMENT_TOKEN_TO_BE_REPLACED (UPDATE 7/6/13: The LA show on July 13 has been canceled. I couldn’t find out any more information other than the San Francisco show on July 12 also being canceled. So I guess if you really want to see him, you’ll have to travel to the East Coast where he’ll be playing as part of the Brasil Summerfest in NYC from July 17-24 and a free show in Miami July 27.)
If the Brazilian Nites Summer Series featuring a bevy of great Brazilian artists like Ana Carolina wasn’t already enough to get you excited for the summer, Brazilian international star Seu Jorge will be performing at The Fonda Theatre in Hollywood on Saturday, July 13! Tickets for the all ages show are on sale Friday, June 14 at 10am for $35 and $45 on Ticketmaster. Seu Jorge was one of the top draws for me at That 70s Soul on December 16, 2012, and I had to be content with just the 2 songs he played as a special guest: the classic 70s hit Everybody Loves The Sunshine and the iconic Brazilian song Mas Que Nada. I’m definitely not missing a chance to see this legend play a full show!

END_OF_DOCUMENT_TOKEN_TO_BE_REPLACED 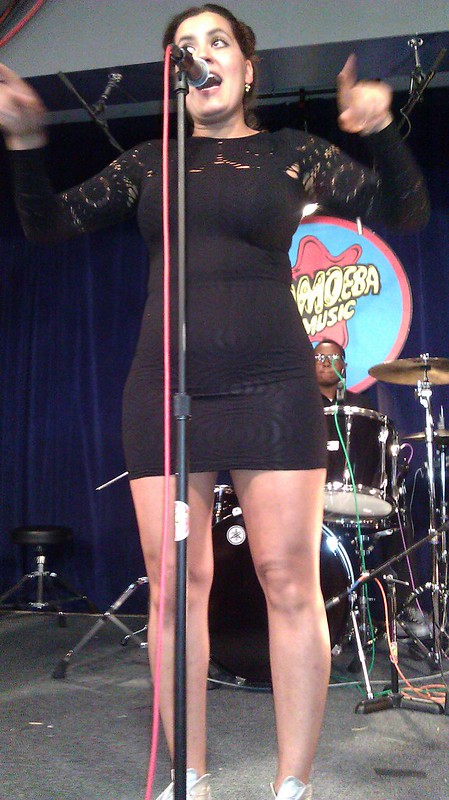 If you’re one of those like me who couldn’t get a ticket to Quadron‘s sold-out show at Hollywood Forever tonight, don’t despair. I was at Amoeba Records yesterday for their free mini-set where Coco O belted out these 5 songs from their newly released 2nd album Avalanche, including the song Neverland dedicated to Michael Jackson. Enjoy the videos! You can also replay their live in-studio set yesterday at KCRW!

END_OF_DOCUMENT_TOKEN_TO_BE_REPLACED

Make Music Pasadena is on Saturday, June 1, and is a great start to the first month of Summer! What I love about music festivals is also what I hate: too many choices!! Over 150 concerts will be featured there! Add to that conflicting set times and throngs of people to get through and my decision-making falls along 2 groups: great musicians I’ve seen before (and love to support) and new acts to be discovered. You can’t go wrong with any of the great bands playing this Saturday but here are my picks. It’s a free festival but please consider donating $5 to support your local music and festivals like this one! It’s forecast to be 92 in Pasadena, so drink lots of water, don’t forget your sunblock and like the song goes…don’t let the heat get you down!

END_OF_DOCUMENT_TOKEN_TO_BE_REPLACED END_OF_DOCUMENT_TOKEN_TO_BE_REPLACED

Last night was the opening night of the 5th Annual Hola Mexico Film Festival and it’s the most ambitious to date! Here are the details from their site:

For the first time, in addition to celebrated and award-winning films, Hola Mexico will include food and music festivals, bringing together some of the best chefs and musical performances from Mexico. END_OF_DOCUMENT_TOKEN_TO_BE_REPLACED

April 20 is the unofficial global day of celebration for cannabis aficionados. I don’t use marijuana but I recognize its benefits and I support its legality. If you’re a music fan, you already know it’s an important source of creativity and comfort for so many talented musicians and there is no lack of musical homage to it throughout the years! Here’s a list of some 420 events throughout LA today and some music, from well-known US hits to some songs from around the world. Much of the list is from Latin America, our southern neighbors. I love discovering new music and would love to find more music about marijuana from Africa, Asia and Europe! If you know any, post them in the comments! As marijuana and music are synonymous, it’s also Record Store Day today too! You can find celebrating venues here. END_OF_DOCUMENT_TOKEN_TO_BE_REPLACED

Hapa Japan Festival is April 2-6 and explores mixed race and mixed roots Japanese people’s history, identity, and representations through film, music, scholarship, an exhibit, and community activity. Come join them for a concert featuring emerging hapa artists, a comedy night at East West Players, readings by award-winning authors, a historical exhibit at the Japanese American National Museum, film screenings of great documentaries, and a 2-day academic conference at USC. Presented by the Hapa Japan Database Project and the USC Center for Japanese Religions and Culture. All events are free and you can register here. END_OF_DOCUMENT_TOKEN_TO_BE_REPLACED